The park features forestation with native plants, in this case from Australia, to recreate an urban public leisure space and with sustainable criteria, which contributes to protecting the environment and improving the quality of people’s lives. The different zones of the design were devised to encourage people meeting together while using the park.

These spaces are differentiated yet linked to each other by means of the materials and textures, the specific furnishing, and fundamentally through the surrounding autochthonous flora, acquiring their own characteristics.

Full management of the project with Lands Design

Firstly, the zoning of the different areas of the project was undertaken (Zoning command), in order to obtain the surface area of each sector and distribute the zones on the plan. Once the needs program (zones) was defined, the land was shaped in a gentle slope (Earth command) along with the structural elements of the project: kerbs and dwarf walls (Dwarf wall/Hedge command), paths (Path command).

The pergola in the form of a fan, taking centre stage in the design, was shaped with the Row command.

Then the vegetation areas of the project were defined: Trees, palms, bushes and perennials, natives of Australia, were selected. In this way different basic and combined plant groupings were created (Shrub and Forest command), alignments of plants (Plant Row command) and isolated examples (Plant command).

The plan with the landscape design has been completed with the reference photos of the species used (PlantPhoto command) and the list of scientific names of the plants. Then the technical replanting plan was defined; the plant species were marked out and the constructive elements of the project (Dimension command). The replanting plan was completed with the identification and number of the plant species (Tag command), and the list of species with the characteristic symbols according to the type of plant used. The lampposts and benches complete the design, selected from the Urban Furniture catalog integrated into Lands Design.

Concluding the project, the presentation was completed with photorealist aerial and pedestrian perspective elevations. In this case, Enscape render engine was used to create the different scenes of the project and to add the HDRI lighting, the specific design materials, and the people. The images obtained do not require post-production, but are the accurate result of the Enscape procedure. 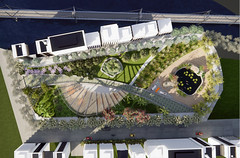 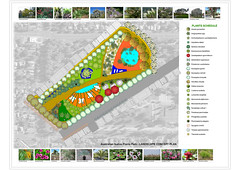 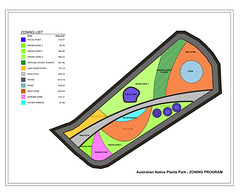 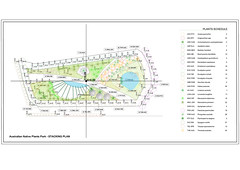 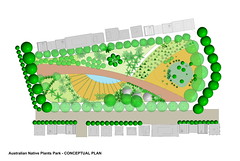 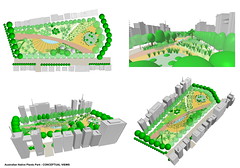