The Canal Park Project arises from a specific demand to give the public and local community use of a space that had been degraded by the course of time and a lack of attention. The land is located in a densely populated, heterogeneous urban environment where single family houses, residential complexes and office blocks coexist and where there is a clear lack of green areas and public space for the people to use. The proposal was therefore to activate, develop and recover this space as a social asset, enabling it to be used and experienced and integrating its landscape design with the immediate surroundings. The park’s main feature is water, which in the shape of lakes and canals, traverses the entire space, generating an interesting route of waterways, framed by colourful and ornamental species of flowers, bushes and large trees with great visual strength. It is worth noting that the attraction of this park does not lie in the variety of species chosen, but in their grouping, composition and distribution. It is therefore around water that the different spaces of the project develop on a topographic map of gentle level changes which give form and identity to each landscape item without disassociating from the park as a whole, but rather integrating with it and bringing great added spatial value.

Integral Management of the Project with Lands Design

Starting with the terrain’s geographic coordinates, the level curves were imported from Google Earth to Lands Design. The imported topographic data of the level curves and the application of the Terrains command produced the topographical relief and 3D model of the terrain. Later the mesh was modified to incorporate the project’s different spatial units. To do this the Cut and Add hole commands were used, the latter enabling us to define the two large bodies of water, amphitheatre, labyrinth and parking area. The Zoning command allowed the proposed needs and use programme for the park to be implemented, such as the entrances, circulation, waterside areas, rest areas, bike paths, amphitheatre, labyrinth, parking, sculpture area, play area, combining these uses with large areas of grass, floor coverings and blocks of vegetation. The park’s structural elements were then defined. The entrances and paths were defined using the Paths command. The path edges and green walls, like the labyrinth, were resolved with the Dwarf Wall-Hedge command. As these commands are intelligent tools, they simultaneously represent the objects of the project in two and three dimensions. Thus, to view the objects in the three-dimensional space, it is simply a question of changing the viewpoint. Simultaneous to the construction of the structural elements, different materials were applied to the objects from the Lands materials library, giving realism to the created images. Then, from an extensive plant database, which provides the botanical data for each species, the plants were selected and then inserted into the image, according to the planting criteria outlined in the design. Then individual plants were inserted using the Plant command, plants in rows using the Row command and plants which cover large surface areas using the Forest and Croundcover commands, the latter for defining floor coverings and green walls. Once the vegetation was inserted into the design, the Plant List, containing botanical names and specimen numbers, was incorporated to complete the Planting Plan. The Setting out and Dimensions Plan was put together from the insertion of the planting axes, thereby enabling the sizing of each plant. The labels were then incorporated that identify and quantify the species used in the project. Finally, applying the Perspective (laSetView) and Section commands allowed different perspectives and sections of the project to be developed, while at the same time incorporating the design into a real environment. Thus, different backgrounds and floor types were inserted giving the created model a spatial context, as well as defining the outdoor lighting by simulating the real natural daylight. Author: Arch. Rosana Almuzara Bertolucci – Paisajismo Digital SL 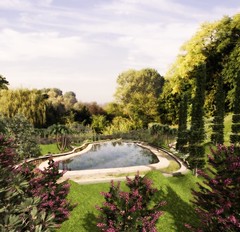 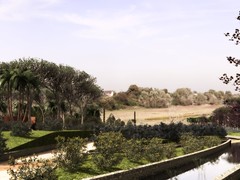 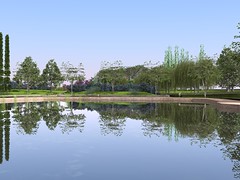 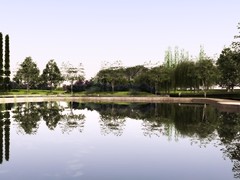 lake with vegetation with filter 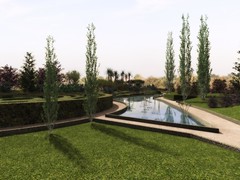 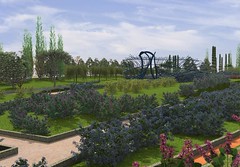 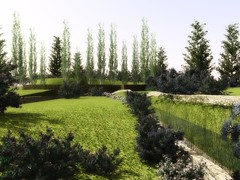 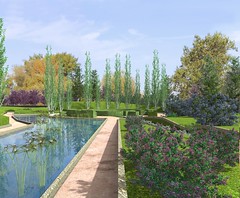 Towards the labyrinth. Pond sector 2 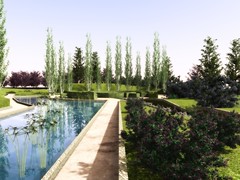 Towards the labyrinth. Pond sector 1 with filter 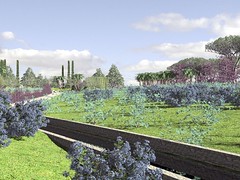 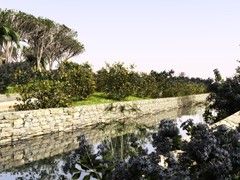 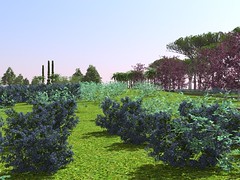 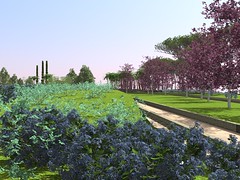 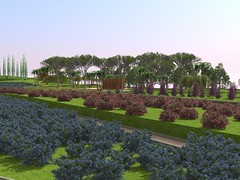