The project is based in the design of the exterior spaces of a manor house, responding to the requirements of the owners: a colorful garden and a vegetable garden that could live together with a water mirror during all year long. These elements were used to generate a genuine garden, that integrates with the architecture of the dwelling, and, at the same time, it is conceived as something that takes off from the environment, through a visual vegetable barrier that surrounds the plot boundary.

Taking as starting point the preliminar guidelines of the project, the zonification plan was developed indicating the different usages of the garden and the corresponding calculation of areas. The laZonify command let me define the areas of the garden, represented with different hatch patterns and the calculation of the corresponding areas: circulation, green areas, vegetable garden, water mirror, leisure and entertainment areas. At the same time, these data was listed in a legend created with the laListZone command where all zones where referenced automatically with the areas. Then, the laEarthScan command was used to import the terrain of the area of intervention. The structural element of the project: kerbs, planters and the columnar elements of the pergola in the leisure area, were modeled using the laWall and the laRow commands. The laFence command let me create different solutions for the fences enclosing the areas with low bushes. With the laPath command I could build two big pathways of irregular shape which contain the mass of low bushes, in the area close to the pergola. Using the commands to create bushes, plant rows and forests I could populate the project with vegetation elements. Applying the option to combine elements in the laPlantRow command I could create plant rows with different ornamental plants. The density of the conifer plants in the garden perimeter was materialized with the laShrub command, (option units/lineal meter), getting the privacy required by the owner. The plant list was included in the garden design plan. This list let me identify each plant with the corresponding 2D crown icon, the scientific name and the number of items for each species in the project proposal. Then, the setting out plan was developed, referencing the plants from the setting out axis defined with the laDimension command. The plants were tagged and quantified with the laPlantLabel commands. Depending on the uses of the garden and the guiding idea of the project, the elements of the decorative and functional furniture were expressly selected: lampposts, benches, sunbeds, cars, were taken from the extensive library of 3D objects, offered by Lands Design. Concluding the project management with Lands, scenes from different points of view were elaborated, using the Perspective command. This command allowed the creation of different visualizations, showing the sectors of the garden and their relationship with the house and the surrounding space. Finally, using V-Ray as the rendering engine, materials, lights and backgrounds were applied that gave realism to the scenes created with the Perspective command. As an added value, through an attractive image editor that includes Lands Design, different artistic filters were applied to some rendered images, obtaining interesting results. Project developed by: Architect Rosana Almuzara Bertolucci – Paisajismo Digital SL 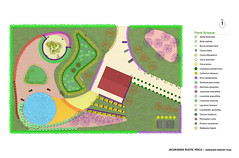 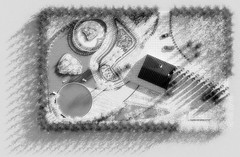 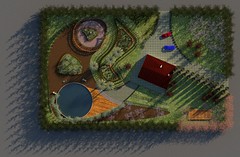 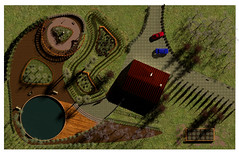