Located in Poissy, at the outskirts of Paris, the Villa Savoye is one of the most emblematic icons of the Modern architecture of the XX century.

In the pictures below, the Villa Savoye has been modeled with powerful digital tools that complement each other inside the Rhino environment: VisualARQ, which focuses in the architectonic model and Lands Design, for the vegetation elements inside the house and for the garden and environment around it.

Lands Design has been used for modeling the terrain around the house in 3D, by importing the elevation contour curves and generating the terrain from them. The terrain and the 3D model integrate perfectly in the same document.

The areas of circulation, gravel paths that organize the exterior area of the Villa Savoye were created through divisions on the terrain. Once these divisions are done, it is possible to assign different materials to each one.
Furthermore, on top of it there were placed several leafy trees and shrubs that surround the villa and provide it some privacy.

This tree vegetation, varied and compact has been created with the laForest command, keeping a clear open space around the Villa.

Inside the building, the laPlant command has been used to dress the wall-rings and small pots located in the terrace of the first floor and garden roof.

Finally, some nice views of the interior and the exterior of the house were created with the Perspective command and using VRay as the render engine for Rhino. Materials, lights and backgrounds have dressed up the 3D model, getting as a result beautiful realistic images of the project. 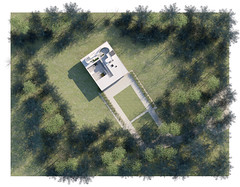