The garden was conceived with the idea of creating a mosaic of typical tropical plants by adding different plant cuttings. This explains why there is no particular central feature but rather each sector stands out in its own way and inter-relates with the others through a network of paths that bring the different mosaics into a single set. The aim was to put across the idea of an almost pictorial composition like an abstract geometric painting through the vibrant and colorful plant material selected, the furniture chosen and the materials used. The result is a balanced and harmonious composition of colors, textures and shapes.

Based on the garden’s preliminary lines, the Zonify command is used to implement the distribution and calculate the surface area of the different zones defined for this space: the lawn zone, the shrub zone and the creeper or grass zone tied in through the paths joining the whole thing together. On the other hand, zonifying is also performed on the rest areas, the focus points and the pond area represented by an attractive water mirror. Then we defined the structural elements in the garden. This is how the Dwarf Wall-Hedge command shaped the curbs that both separate and integrate the plant masses and the paths. The Row command helped to create the attractive metal fence in superimposed semi-arches, separating the highest bushes from the grasses or the low plants. Using the Urban Furniture Library included in the application, two wooden pergolas were picked that ordered the outline of the garden’s two main paths. Large planters were also selected that, when covered with flowers, made these paths very attractive. Designer street lamps and benches complete the urban furniture suggested for this space. These objects have been taken from the complete block manager that Lands offers its users. They can select urban furniture items provided by major companies from the landscaping sector and landscape architecture. The vegetation for this project was implemented using the Forest, Shrub and Plant commands. Consequently, isolated samples were inserted using the Plant command to define the garden’s focus points; grass edging was made using the Row command and the Forest and Shrub commands were used to define the random vegetation masses. Eye-catching plants with tropical characteristics were picked from the vast plant database included in the application. Their color, exuberance and particular morphology give this plant mosaic garden great appeal and identity. The planting plan was completed by inserting the Plant List in the drawing, featuring the botanical name of each species and the quantity of samples. The technical setting out plan was then defined. The Dimension command was used to insert the setting out axes from which the plants were sized along with the project’s different structural elements. The setting out plan was completed with the species labels that are inserted through the plant Label command to identify and quantify each of the project plants. The Insert list command is used to add this data (name and quantity) on a list illustrated with characteristic symbols according to the type of plant used: deciduous, evergreen, conifer, palm. Finally, the Perspective command is used to provide pedestrian and aerial perspectives for the main sectors of the garden. Materials, backgrounds and lights are incorporated to provide highly realistic images and give the project great visual appeal. Author: Architect Rosana Almuzara Bertolucci – Paisajismo Digital SL 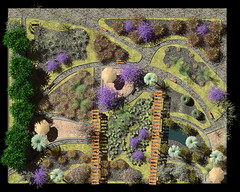